• What to expect from the Star Wars Blu-Rays and meet the stars of the hotly anticipated deleted scenes!

• Radio Waves! In the second part of our exclusive feature, discover how The Empire Strikes Back and Return Of The Jedi made it on air!

• Prototypes: Unproduced, but not unwanted! Insider looks at the toys that might have been!

• Phanboy! As part of our ongoing series, A Certain Point of View, Fanboys director Kyle Newman looks back at Episode I!

• An exclusive look at the forthcoming Star Wars: The Blueprints book.

• My Star Wars! Star Wars superstar Tom Kane puts down his microphone to share some of his favorite memories of the saga. 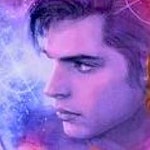 So this is Luke Skywalker's Legacy???